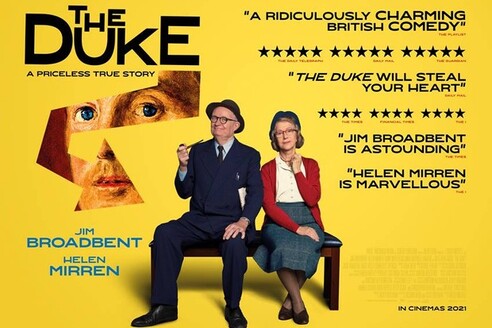 Jim Broadbent plays Kempton Bunton, a real-life figure who achieved notoriety in the mid-60s after the theft of Goya’s portrait of the Duke of Wellington from the National Gallery. We meet Bunton in the dock in London, pleading not guilty to pilfering said painting, of which he was never a fan (“It’s not very good, is it?”). From here we spiral back to Newcastle in the spring of 1961, where the retired bus driver and self-proclaimed Robin Hood figure has felt the long arm of the law for refusing to pay his TV licence fee. Outraged that public money is being spent to keep a “half-baked portrait by some Spanish drunk” in the UK, habitual soap-boxer Bunton declares that the money would be better spent on “war widows and pensioners… for the greater good of mankind”.

When the Goya goes awol, the authorities suspect highly organised international criminals, probably including “a trained commando” (the 1962 Bond film Dr N fancifully placed the painting in its villain’s lair). But when Kempton’s long-suffering wife, Dorothy (Helen Mirren), finds “a stolen masterpiece in me wardrobe!”, it appears that her husband has outdone himself in his quest to battle social injustice at large while driving his nearest and dearest to distraction at home.

Bunton’s stranger-than-fiction story has been dramatised before, most notably in David Spicer’s 2015 BBC radio play Kempton and the Duke. The well-crafted script for Michell’s film is co-written by Richard Bean and Clive Coleman, the latter of whom served as legal correspondent for the BBC. All of which makes it doubly ironic that a central theme of The Duke is Bunton’s staunch BBC refusenik status and his campaign against the licence fee for pensioners, something that has become all the more timely since the film premiered at Venice in September 2020. In last week’s Observer, Broadbent noted that “now Kempton would be defending the BBC to the hilt against these wicked people trying to dismantle it by foul means. He’d have switched sides.”

As for The Duke, it’s jovially neutral fare, preferring to frame its story as an unashamedly old-fashioned underdog tale – an absurdist struggle of the little man against monolithic bureaucracy. Broadbent is terrific in the lead, investing his bumbling antihero with a winning blend of fearlessness and foolishness even as the film tips from social satire into theatrical silliness. Plaudits to Mirren, too, for turning exasperation into an art form.
Wednesday doors open 6.45pm and the evening’s entertainment starting at 7.15pm and ending about 9.30pm.

The Thursday matinee will have limited seating and require pre-booking.  The doors open at 2 pm film commences 2.15pm and ending about 4.30pm.  For this performance we ask that masks are warn until you are sat, refreshments will be brought to you.  We hope this will encourage those who need to take extra health care to feel confident that they can come along and enjoy a film and have a cream tea / ice creams/tea/coffee, during the interval.  The cream tea must be booked when booking the seat at a cost of £3.

Please state Wednesday or Thursday when booking. Tickets pre-booked £5 or £5.50 on door.  Children under 12 accompanied by an adult £3.